After the passing of Rivergirl (Robyn), Hillybilly (David), Blackee (Anthony) & me, 93ben (Ben); have taken over running the forum. I just wanted to let you know that I'm currently in the progress of cleaning up and updating things after I was able to finally gain access to it. We will post more later.

Despite a cool start to the month, Brisbane has just experienced it's warmest July in five years, according to weatherzone.com.au.

Minimum temperatures were a stand-out feature. They averaged 12 degrees, two degrees above the long-term average, making them the highest on record for the ten-year-old Brisbane site.

Maximum temperatures weren't as exciting. This year's average of 22 was almost exactly the same as the long-term July average, but it was still the highest in four years.

By combining minimum and maximum temperatures, this July was the warmest in the Queensland capital since 2005.

“There haven't been many strong, cold systems over southeastern Australia in the last month,” explained Samuel Terry, meteorologist for weatherzone.com.au. “Normally, cold air behind these systems will filter north, affecting both minimum and maximum temperatures in Brisbane. However, this July we didn't really see that.”

“Another factor that contributed to the overall warmth was the sea surface temperature in the Coral Sea. This was persistently around one or two degrees above average over July, particularly affecting minimum temperatures.”

Rainfall in Brisbane during July was slightly above average, with the monthly total coming in at 28 millimetres. Most coastal towns were similar to Brisbane in that they too picked up in excess of their monthly average. However, inland locations didn't fare as well. Archerfield only received forty percent of its long-term average of 51 mm.

“Historically, winter is by far and away Brisbane's driest season, so even slightly more rain than usual will be noticeable,” Terry said.

“Generally, the forecast is for above average rainfall in southeast Queensland as we head into spring and then into summer, mainly due to the development of a La Nina. However, the next week should be mostly dry, with only brief showers possible on Thursday and Friday.”
Mansfield 370m and Elwood
Top

Beautiful conditions across southeast Queensland today. Sunny and warm with temps in the low 20's!!

Good to get out of the cold for a while. Expecting some good shower and rain activity in coming days, but a lovely one tomorrow.
Jake - Senior AWF Forecaster
Feel free to send me a private message if you have any questions.
Top

First day of Spring tomorrow which marks the start of the Storm Chase season up here for us Queenslanders!

Thanks for having me aboard the forum!
Check us out on Facebook: 'South Brisbane Storms'
http://www.redbubble.com/people/southbrisstorms" onclick="window.open(this.href);return false;
Top

Fingers crossed for a wicked storm season for the QLD crew!

Thanks very much for the warm welcome! Already there is nice convection happening beneath the inversion for near-on Spring! Hopefully the moderate La Nina conditions we are starting to endure produce some nice thunderstorms around the region over the coming next few months! Thanks heaps to a personal friend Johnoo who recommended I join up here!
Check us out on Facebook: 'South Brisbane Storms'
http://www.redbubble.com/people/southbrisstorms" onclick="window.open(this.href);return false;
Top

Good to have you onboard Vortex

Finally spring has dawned on us under a moderate La Nina setup so things should get interesting from this point in time until the end of 2010. We are in for an interesting weekend of weather up here in SE Queensland with an upper trough moving into SW Queensland this afternoon which should generate a thunderstorm or two tomorrow. Currently the Bureau is expecting the trough to push to the East over the weekend as a rainband with moderate to heavy falls rather than generating any decent thunderstorms in the area. I tend to agree and I think that cloud cover might be the killer.

Prior to this event over the weekend, Friday appears to have a SW wind change moving through and again there is no particular mention of any thunderstorm activity apart from a few showers along the change. At the same time the main trough pushes to the East from the West in a NW to SE alignment, a surface trough develops preceding the main upper trough. With both upper and lower troughs combind I would think this could be enough a few isolated cells pending the outcome of a couple of other elements.

Still a fair way out but something to think about none-the-less. Interestingly enough GFS is going for roughly 5mm over the next 120 hours from now and 25mm over the course of 180 hours. I think the big winner here will be central queensland which is progged to receive up to 125mm associated with this event.
Check us out on Facebook: 'South Brisbane Storms'
http://www.redbubble.com/people/southbrisstorms" onclick="window.open(this.href);return false;
Top

Thinking of perhaps chasing tomorrow around the Warwick area or the Southern Downs. There is moderate instability from the trough approaching from the west so it might be a decent chance of a few moderate thunderstorms. Sunday and Monday are also looking the goods at the moment on both GFS and Access.
Check us out on Facebook: 'South Brisbane Storms'
http://www.redbubble.com/people/southbrisstorms" onclick="window.open(this.href);return false;
Top

Looking good Andy!
A Severe Thunderstrm warning has been issued for the far SW of the state, as the interior starts to light up!

Feel free to start-up a Breaking Weather thread for this weeks storm events, or perhaps start a new thread in the Storm Chasing board!

SWW current for north of Brissy, Brisbane and the Gold Coast this afternoon, big one tracking towards northern Brisbane suburbs currently.

for FLASH FLOODING and LARGE HAILSTONES

For people in the MORETON BAY and parts of the BRISBANE CITY, GOLD COAST CITY, GYMPIE, SUNSHINE COAST and SOMERSET Council Areas.
Issued at 3:48 pm Tuesday, 3 May 2011.
The Bureau of Meteorology warns that, at 3:50 pm, severe thunderstorms were detected on weather radar near the area southwest of Gympie, Tallebudgera, Miami, Dayboro and Mount Mee. These thunderstorms are moving towards the east. They are forecast to affect Coolangatta, Caboolture, the area south of Gympie, Narangba, Burpengary and Wamuran by 4:20 pm and Strathpine, Redcliffe, Deception Bay waters, Beachmere, Kandanga and Amamoor by 4:50 pm.
Very heavy rainfall, flash flooding and large hailstones are likely.
Thunderstorms today have already produced very heavy rainfall of 35mm in 30 minutes at Moogerah Dam at 1:40pm.
Small hail has been reported around Brisbane between 1pm and 2pm.


Severe thunderstorms have affected the south-east Queensland this afternoon with heavy rain and hail reported in and around the Brisbane CBD.

A severe thunderstorm warning was issued by the Bureau of Meteorology for flash flooding and large hailstones as the storms approached from the west to north-west early in the afternoon.

Numerous sightings of small hail were reported on twitter as the storms moves through south-east Queensland. Reports of hail were also made on The Weather Channel’s Facebook wall with hail up to the size of marbles reported in Caboolture.

At this stage the storms are expected to affect Aratula and Rosevale by 2:55 pm and Boonah by 3:25 pm. So far very heavy rainfall has been reported as a result of the storm activity, with 35mm in 30 minutes at Moogerah Dam by 1:40pm.

The rain and storms, which are the result of an upper level cold pool interacting with lower level warm air, are expected to persist into the evening before easing overnight. Only isolated showers are expected tomorrow afternoon in Brisbane after a mostly fine day.

Lucky buggers, May and they're still getting storms.
http://www.ozstorms.com | http://www.redsevenphotography.com
Top

Nice time lapses, looks brilliant just wish I could see the real thing instead of watching it on a screen.
Top

The mention of a risk of sleet or ice pellets for the southern Darling Downs district of SE QLD on Wed given enough moisture was included in yesterday and today's QLD forecast policy. The EC ensemble currently suggests up to about 20% probabilities of snowfall on the northern NSW tablelands up to the border during the 24hrs to 10pm Thursday.
Top

How cool is this, from this afternoon - http://webcams.bsch.au.com/timelapse.ht ... helidon_se" onclick="window.open(this.href);return false;

I can confirm first hand that the Boonah / Beaudesert cell was pretty impressive to watch - even from 50k's away in Brissey CBD - was lucky to get a great hotel, 23rd floor, on the river on Coronation drive - and a SSW facing room. Watch it popping up from mid afternoon, and arrived at hotel just before sunset and got this shot: (from my phone) 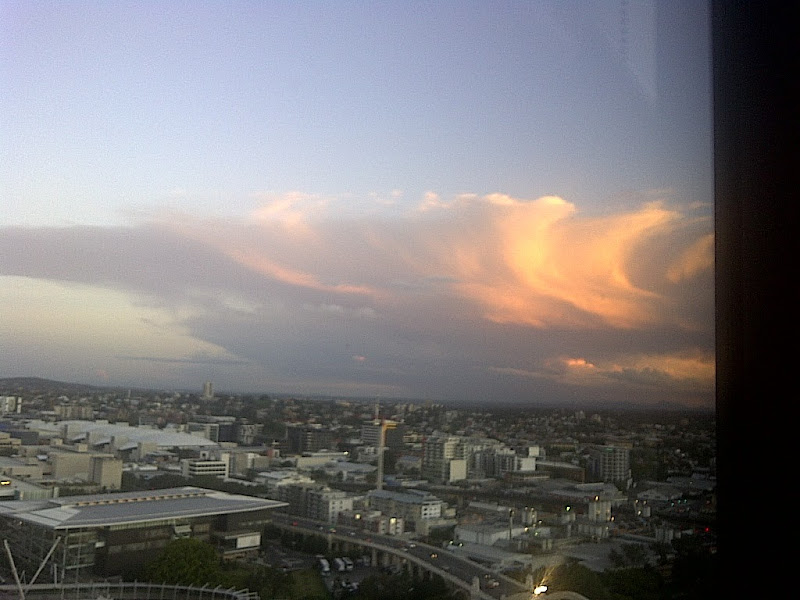 Nice! Did you get any sparkies?

Just updated the first link. Should show the early development of that storm now with the bubbling cu.
http://www.ozstorms.com | http://www.redsevenphotography.com
Top

Lovely! Amazing how it's almost stationary in the development stage. Love it, certainly good for SDS

Been sitting here watching the light show for the last 2 hours or so - mesmerising stuff - I think us Victorians have really been deprived this year, even distant storms are exciting!
Top

Just about to get slammed by a juicy looking storm, got a perfect vantage point were I am working - 180 degree view to the south