Hillybilly (David), Blackee (Anthony) & me, 93ben (Ben) have taken over running the forum after the passing of Rivergirl (Robyn) last year . I just wanted to let you know that I'm currently in the progress of cleaning up and updating things after I was able to finally gain access to it. We will post more later.

October kicks things off with a large incursion of tropical moisture from the North.

Most of Northern Victoria looks set to get a significant amount of rain if the forecast models are correct. It could cause riverine flooding.

Latest GFS run shows you are on the money: 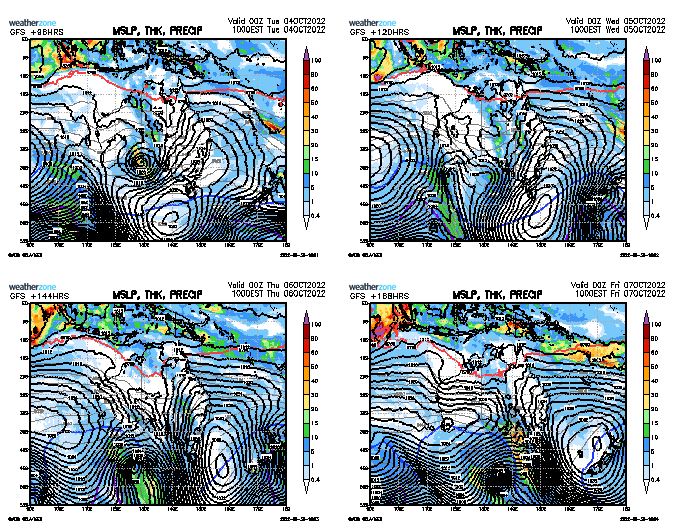 Plenty for all areas of Vic. Possibly apart from the NW, most would like a week off?
Top

Wow, if this comes off some places are going to be in serious trouble.

I think you are right Supercellimpact looking at that chart.
We have had roads closed around here due to flooding, that have only just opened, think I need to stock up.
Top

I'm thinking 30-50mm here this week. Maybe NE Vic could be the focus this time around?

Quite a lot of debate regarding the shallow water storages around Stanhope at present. Green Lake is only 14%, and Lake Cooper is still empty. Is G-M Water keeping them empty to use as airspace for when flooding is a risk?
Top

Latest CMC shows the system on track, perhaps with a little less rain, but still very significant, especially for the Vic NE: 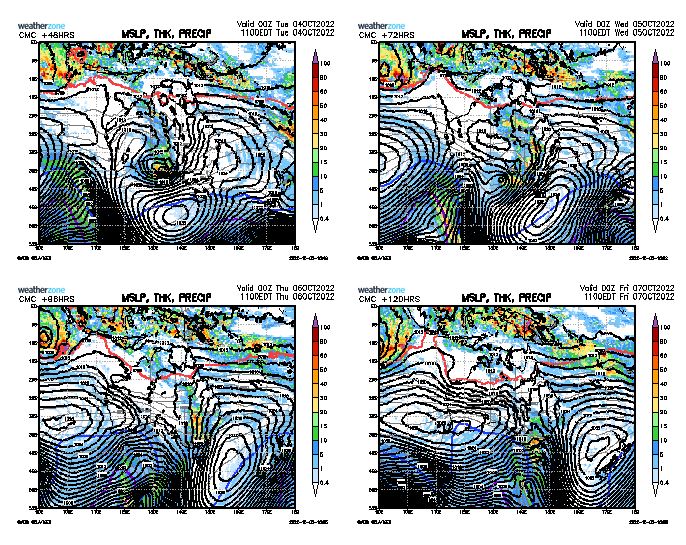 Plenty of moisture arriving from both WA and QLD. Storms.
Top

This morning has ramped it up a little. Ensemble forecast suggests 60+ mm.

Generally that won't cause major problems, although 100mm+ in the catchments might cause grief as happened in January 2011.
Top

That said, inland NSW is likely to be in huge strife later this week. It'll be more an inland sea than anything...
Top

StratoBendigo wrote: ↑Mon Oct 03, 2022 8:25 am That said, inland NSW is likely to be in huge strife later this week. It'll be more an inland sea than anything...

Yep. Even this lower intensity rain event for Vic will be the initial start of a multi-month flood event for most of our Nth regions as well.
Top

Even the BOM which is usually pretty conservative are throwing out big numbers. i.e. 50% chance of 65mm all up.
Top

Looks like I was wrong again on earlier post, the moisture for this event is likely to be IOD sourced? The present Aus Satellite WV image: 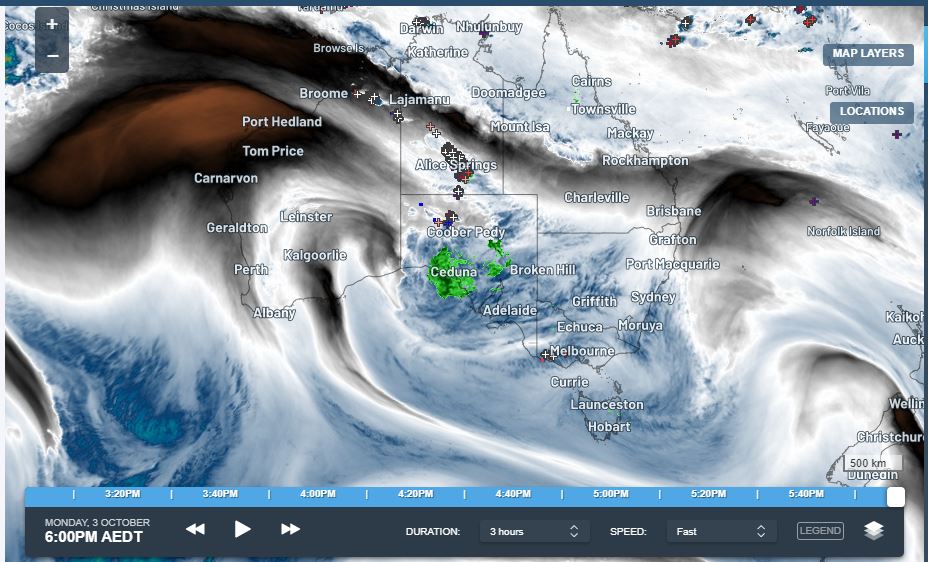 For us in Nth Central Vic, latest runs from CMC and EC tally 39/30mm total by Sunday morning. Just shy of problematic. Some farmers around here have cut the first silage of the season (very early), and are hoping they can get it cured and wrapped by the rains of this event in a couple of days time. I'd say, storms are the biggest risk tomoz/Wed.
Top

Off to a bad start here with 5 mm in 10 minutes from thunderstorms which weren't even forecast. More than quadruple 0-1mm forecast... hope that trend doesn't continue for the next few days

In a - IOD, just wants to rain here at the slightest excuse.

But big week once again for Vic, many rivers in North Vic will go back into Minor flooding some into Moderate flooding.
Sadly in NSW willl go Major flooding a looming disaster up there and only early October such widespread flooding even away from rivers be huge flooding.

Another big week of weather this week terrible for NSW but just priming Vic for the big one get 100mm in NC NE Vic be big big flooding
Murray still rising up to 20-30cm a week atm and lots lots more to come.
Bring on the heat and stroms
Top

Watching this event unfold from the far south. Looks big, particularly for NSW and northern Vic which are tracking exceptionally wet. If this keeps up must be a chance for the wettest year on record for many of those areas

Sydney is almost there, with lots of other places not far behind. Still a couple of months of negative IOD and a summer of La Niña to come.

Is interesting that a lot of commentary is about multiple systems, though it is more a single trough that gets blocked then gets mobile for a period then eventually cuts off and forms a east coast low somewhere near Bass Strait. The outcome is waves of rain and storms.

Tasmania looks more hit and miss. Initially northeasterly flow will drop heavier falls in the northeast, then the northerlies on the weekend will pile up on the northern half of the state. Not clear whether the cut off will be far enough west to fill in the southeast. Overall pattern continues what’s happened all year with unusually wet conditions in the east and northeast, but misses for the southwest.

For a bit of contrast a dusting of snow on Kunanyi this morning. This cold air supercharges the coming trough.
Top

What are people's thoughts on Friday for North Central Vic I'm no expert but the way I read the charts another 20-40mm could come our way but weatherzone oand the BOM are only saying 1-5 mm.
Top

ollie wrote: ↑Tue Oct 04, 2022 8:41 am What are people's thoughts on Friday for North Central Vic I'm no expert but the way I read the charts another 20-40mm could come our way but weatherzone oand the BOM are only saying 1-5 mm.

Forecasters are really struggling with the detail on this system, but I would say 1-5mm is optimistic (assuming you don't want flooding) for Kangaroo Flat on Friday.

WATL http://www.bom.gov.au/jsp/watl/rainfall/pme.jsp this morning (average of computer models) has you down for 15-25mm.
Top

ollie wrote: ↑Tue Oct 04, 2022 8:41 am What are people's thoughts on Friday for North Central Vic I'm no expert but the way I read the charts another 20-40mm could come our way but weatherzone oand the BOM are only saying 1-5 mm.

Forecasters are really struggling with the detail on this system, but I would say 1-5mm is optimistic (assuming you don't want flooding) for Kangaroo Flat on Friday.

WATL http://www.bom.gov.au/jsp/watl/rainfall/pme.jsp this morning (average of computer models) has you down for 15-25mm.

It's looking like 25-35mm on Wednesday, and another 10-20mm Thursday, with 15-30mm on Friday. That's what the BOM are saying. Local creeks will be running a banker, or more.
Top

Ok thanks that is what I was thinking if we get the high end of the forecast it will be super wet around here.
Top

Yeah big falls next 5 days on and north of the ranges east of Swan Hill to Ballarat
Easy 40 to 60mm with isol 80 to 100mm half that falling tomorrow then again Thursday night into Friday lots of flooding.

Almost every river in N Vic is in a Flood Watch for coming days, expect many Minor to Moderate flood warnings later this week

Melb light to mod rain at times Wed and Friday