Hillybilly (David), Blackee (Anthony) & me, 93ben (Ben) have taken over running the forum after the passing of Rivergirl (Robyn) last year . I just wanted to let you know that I'm currently in the progress of cleaning up and updating things after I was able to finally gain access to it. We will post more later.

A day to day thread to discuss weather happening in Adelaide and around South Australia. This thread is to carry on the spirit of the major day to day forum on WeatherZone
Top 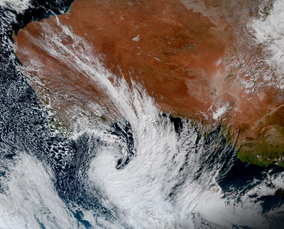 The BoM suggests to batten down the hatches in Adelaide tomorrow

Issued at 3:58 pm Tuesday, 9 July 2019.
Damaging winds for the south of SA on Wednesday with a strong cold front.

PWeather Situation: One of the strongest cold fronts so far this winter will sweep across South Australia during Wednesday afternoon and evening. The front will bring damaging winds, squally showers and thunderstorms to much of the southern half of the State.
Strong to damaging northwest to westerly winds, averaging 50-70 km/h with gusts in excess of 90 km/h are expected to develop about southern coastal districts and also about the Mount Lofty Ranges during Wednesday morning, then extend across the warning area during the afternoon.
For southern parts of the warning area, there is also a risk of locally destructive winds with gusts in excess of 125 km/h, associated with heavy showers or thunderstorms near the cold front.
For the Adelaide area, the strongest winds and heaviest rain are likely from about mid afternoon into the evening.
Locations which may be affected on Wednesday morning include Port Lincoln, Kingscote, Victor Harbor and Strathalbyn, extending during the afternoon to include Adelaide, Mount Gambier, Maitland, Clare, Murray Bridge and Keith.
The State Emergency Service advises that people should:
* Move vehicles under cover or away from trees;
* Secure or put away loose items around your property.
* Stay indoors, away from windows, while conditions are severe.

The next Severe Weather Warning will be issued by 11:00 pm ACST Tuesday.
Warnings are also available through TV and Radio broadcasts, the Bureau's website at www.bom.gov.au or call 1300 659 210. The Bureau and State Emergency Service would appreciate warnings being broadcast regularly.

Nice drop BD7. Latest Access C has a bit more coming in the next 36 hours as well.

37mm in past 3 days here in eastern ad hills
Top

Looks good for a strong frontal series next weekend for SA, mainly southern areas again.Good and consistent on EC progs. Possibly some NW clou-band moisture in southern areas ahead of main front.
Top

These drizzly days are keeping the rainfall totals ticking over, but not really sure if they're doing much to help those that really need the rain. I haven't been up to my property near Mannum to see how I've fared up there, so no idea what has fallen out that way. Probably not too much due to the rain shadow effect of the Mt Lofty Ranges. Hope to get there July 27.
Top

Yer I'd say not too much rain in that rain-shadow area Werner, few showers getting over the hills once in a while and a few from up the river south at times there in the past month, but would be struggling a bit I'd reckon...let us know how you go
Top

Oh..,A little bit of action for the SA ers'

Late sunday the 28th July a precipitation signal appears on ACC g over the southern region.
And intensifies into monday the 29th July

A tropical dip in isobars at the surface layer.
Combined with support from a weak 500hpa trough
at the 200 hPa layer above ,a tad of convergence as some minor sub polar wind streams converge with a strong sub tropical jet.

Bit of a dry period now before the SAM crashes negative again - large slow moving high, good gardening weather at least. SST's warmed a little off NW WA and cooled in the western Indian whilst warming in the central Indian....dare I say Indian modoki like...but may cool again when SAM goes negative. At the same time the giant high will at least push moisture into QLD but how far west that gets is the question...it would be nice to have a big front push in and be able to grab some pacific moisture at the end of the cycle.

Agreeing with 'JS' and 'didjman' in the VIC thread. We have a decent cold pool forecast to arrive around the 8th August for South Australia, Adelaide vicinity. This will be its first port of call.
532 thickness encroaches on to the mainland , as far north as Port Augusta later in the evening.
A deep low centred off west Tassie, jam packed' with moisture.
Tighter isobars on this western flank likely to bring strong on shore winds.
This should be good.

Mount Lofty is the coldest location in the Adelaide area; during winter months the temperature may not exceed 3-4 °C on some days. The summit is the most common location for snow in South Australia; rare snowfalls sometimes occur in other parts of the Mount Lofty Ranges, and in Northern South Australia.

A tad of a downgrade for sth Australian coast for this incoming trough tomorrow. Then cold pool only peaks at 536 overnight on wednesday (tomorrow)and into early morning.,The precipitation signal is mainly before the cold pool and looks quite robust at around 4pm.Chance of thunderstorms perhaps.

Some more westerly belt action during the week

yep BOM suggest a thunderstorm
'
Wednesday 7 August
Adelaide region
Cloudy. High (80%) chance of showers, most likely in the afternoon and evening. The chance of a thunderstorm in the afternoon and evening. Light winds becoming westerly 20 to 30 km/h in the late afternoon. Overnight temperatures falling to around 8 with daytime temperatures reaching between 13 and 16.
'
source
http://www.bom.gov.au/sa/forecasts/moun ... nges.shtml
Top

ACC g has a moisture laden westerly trough crossing the southern coast near Adelaide region on sunday 18th August 2019.
A decent cold pool sits behind with thickness down to 532
The coldest air arrives about 4pm and overnight. Chances of snow at higher elevations

A bit unstable in the Mid North all day today, but just virga.

An interesting sunrise, some Mamantulas, pretty clouds from the west all day.

Its trying to rain, but just the odd shower about.

"farmers need rain" Its all Ive hard since the 80s I reckon.
Top

I will see how 16 inch thick stone walls go, but no insulation in ceiling and tin roof so it will get warm inside.
Top
Post Reply
24 posts