We do get extra strong SSE winds locally due to the gap next to the mountain, which creates very windy days, usually in summer , when the rest of the state is just "breezy' and yesterday, last night and today we had a severe synoptic set up to support it. Result was carnage.

I didn’t know that about Woodend, but it does make sense that there would be a kind of tunnel effect given the local topography. Crazy night - something I wouldn’t want to experience again. We’re also quite exposed to southerlies here, which can be especially strong on summer afternoons when sea breezes kick in.

Hope the Davis is ok. Shame you missed the readings but that ground reading is a pretty strong indication of what was probably close to cyclonic.
Top

Good to hear no one hurt.
Thanks for sharing photos.
Caught up on a bit of missed sleep, innerspring tonight, camping over.

Gippy hope this next lot is kind to you all..
let it soak in before the next lot arrives..
http://australis.redbubble.com/
Top

Quite a thick fog this morning here. Visibility down to less than 50 metres
https://www.weatherlink.com/bulletin/53 ... 76dd68e8bc: for current weather updated every 2 minutes
Top

Pretty bad damage from erosion caused by wave action on the rock walls at Port Melbourne, will be expensive to fix. Biggest seas I’ve seen on the bay in years.

61.25mm here for the event so far. Managed to have power on the whole time.

Mostly dry for the last 24 hours here, fog and calm here this morning.

Tomorrow looks wet for us here as the south westerly kicks in.
Top

Some interesting outputs for next week. GFS likes it. EC ho hum..
Top

14.8mm's in the 24 hours to 9am. System total (4 Days) 52.9mm's.
Ballarat had some trees down and some blackouts but not at my place.
Had 4 days in a row of 10mm's or more which does not happen very often.
Ballarat was also warmer than Sydney Yesterday Max 10.5c in Ballarat
and 10.3c in Sydney that doesnt happen very ofter in Winter
Top

Unsure where the rain will come from as nothing on radar, yet 70% chance of showers today
https://www.weatherlink.com/bulletin/53 ... 76dd68e8bc: for current weather updated every 2 minutes
Top

A stupid hot 17c today. What a joke. What happened to winter?
Top

It's residing in 9C Gordon, though after 4 hours on the chainsaw, it felt like 30C!

On a side note, a mate in his 40s sent me a video of his property near Khancoban at approx 300m asl, covered in snow yesterday morning. He's lived there all his life and never seen snow settle there before. (And Sydney had the coldest June day in 37 years yesterday, so they stole a bit of your winter too!)
Last edited by Gordon on Fri Jun 11, 2021 3:46 pm, edited 5 times in total.
Top

Another blob of weather inbound by the looks?
Top

So there is! Nothing at all in our forecast? I guess the blob must be due to move directly due north and miss us?
Top

Yep. And that blob has just manifested itself as "very familiar" rain on the roof here just now.

Finally cleared all tree debris off Royal Maffra late this arvo, despite another 3.5mm rain this morning (114mm for this thread), golf is still playable here this arvo because the bulk of it all fell over one night, ....and that after near 3 weeks of minimal rain.

But this blob, might be the straw that broke the camel's back: 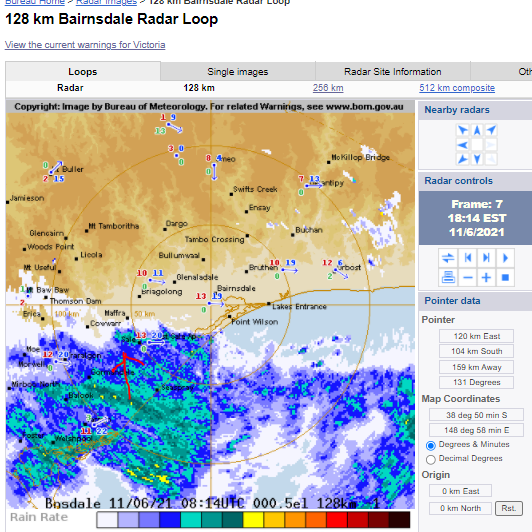 This aged old body hopes that tonights rain wont be accompanied by any wind!
Top

The blob has reached Warragul. Steady moderate rain over the last hour or so.

Just noticed the SWW out for heavy rain for our area. We could do quite well here over the next 24 hrs.
Top

The ECL has dragged in warm air from Fiji from what I can see. Not unprecedented - a similar thing happened in June 2007 and July 2001.

Btw, around Blackwood and Bullarto is a real mess. 1000s of trees down.
Top

Btw, around Blackwood and Bullarto is a real mess. 1000s of trees down.

Mt Baw Baw’s 280.6mm is the third highest total on record for Vic in June so certainly up there. Suspect the set up would have given higher totals below the summit, but no stations to report. Tis interesting that the two previous higher totals are further east, which is what you’d tend to expect as Bass Strait gets warmer the further east you go. The targeting of west Gippsland and east central is most unusual, with lots of records in the Yarra ranges.

For us, our 75mm was high, but just below our June record from 1 June 2013 (that night was probably the craziest over ever experienced with hours of thunderstorms more typical of mid summer overnight).

The same low is now making one last loop into west Bass Strait. More heavy falls in South Gippsland and West Gippsland. East Central has an intense gradient with EC showing about zero for ares west if Melbourne and 25-40mm for the outer south and east. Raining heavily here atm under one of the bands wrapping around the low

Btw here’s a photo of the snow at Khancoban. That’s about 300m elevation. EC picked this very low snow on the western side of the great divide. I heard of similar snow to around 200m near Corryong. Suspect it was classic snow falling into air trapped the valleys lowering the snowline through latent cooling. This happens quite a lot in the valleys around Marysville and parts of Tas, but otherwise not that common in OZ.

I'm not sure where this crazy warm air is coming from in northern Tassie but at 9.30pm in Launceston 10 days from the winter solstice it is 15 degrees! That would be considered warm for this time of night in March!
Top
Post Reply
198 posts