Tropopause has dropped again, and is the polar vortex on the verge of splitting again?

Great find 'didjman' I will take some snaps of that today for the archives.
Could you tell us again what height you are sampling from? 50hpa?

Also have you thought of looking at any other depths that null school offers.
10hpa, 70, 100, 200etc
Then you can see the depth of this dumbbell formation

Quite curious the warm/cool pool it has stopped rotating around the pole. From the 10th July to the 16th of July and has intensified.

I look forward to your reports 'didjman' on some of the other heights
I would appreciate if you posted the links for each height.
I find navigating that nullschool animation frustrating.

Here are the static snaps of your recent finds , for your archives and mine
cheers
.....
Stationary warm/cold anomaly 50hPa

DUMBELL shape suggesting possible split in centar polar vortex underway as seen on this side on view of 50hpa in the stratosphere layer.
We will note here ,we saw a complete split at this layer on the 7th July 2019..source nullschool windstreams

Thanks for the soundings link 'didgman'. It is an area that l have had very little to do with.
I had no,idea that aero' link was there on BOM.,Never been there before.
.....

Soundings are used in aviation and by stormchasers - among others

In the current sounding for Melbourne, see where the right hand line for the 2300utc sounding appears to kink backwards (toward top right hand corner as you go up in height - read off the left hand side of chart). That's the tropopause

The lack of sub polar jet under Aus is a very pertinent observation imo.
Top

Check this out at 500hpa. Is it the subtropical or polar jet that has weakened atm over OZ??

The tropopause is down to 9klm, polar vortex is egg shaped (was circular yesterday) and the warm temp anomaly is still stationary.
Wallan PWS: https://www.wunderground.com/personal-w ... N9#history

Hi Petros. Yes not what we want for good southern fronts.
I went back over my online notes and found 2019 was not the only year with a strong tropical jet and weak sub polar jet.
Here is June 2015.which is looking like 2019 atm 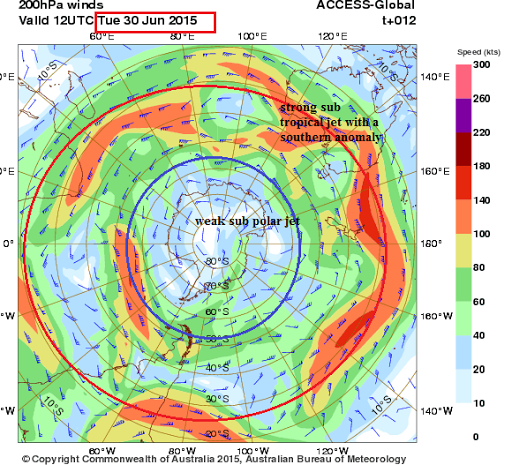 and a contrast
2014 was a great year for a strong sub polar jet. in August anyway
this shot thanks to Geoff Sharpe

Isn't what's happening at 500hpa what governs our overall day to day weather?

Hi Didjman'
The sub polar and sub tropical jet are observed at the 200hpa layer and is lower stratosphere.

The 500hpa layer is in the surface layer often refered to as the mids layer of sometimes even loosely coined in discussions' the uppers'.

The 500hpa layer is an important feature for our weather but 'no variable is an island' . The parts work together.
.....
The nullschool 500hpa windstreams you have posted shows a strong pattern sith some high velocity streaks. A point worth noting.

Thanks for your observations
Top

Hi 'stratobendigo'.
Thanks for joining the conversation
Firstly.,Trying to find information about jetstreams in the SH is very hard .Its always the NH that is mostly found in the literature.
I would expect the dynamics are somewhat similar, except we have a vast expanse of sea in the SH and l believe it makes our jets less prone to massive waves like they get in the NH from temp land and ocean contrasts.

That makes you comment regarding sea surface temps' more intriguing. Surely the ocean temps have a significant role

One quote from credible source
'Why is jet stream so far south?
In the winter the polar jet moves south and becomes stronger because the North Pole gets colder but the equator stays about the same temperature. This increases the temperature contrast and moves the strengthened polar front jet farther south.
https://climate.ncsu.edu/edu/JetStream

From that comment one assumes that the jets being south for winter is a regular event.

and so we can look at that temp' gradient this summer and see the difference in position of sub tropical jet , l suppose

Polar vortex is stretching, possible split in a few days. 50hpa temp anomaly still appears to be stationary. If the LWT lines up for end of month, game on IMHO.

Tropopause down to just above 6km:
http://www.bom.gov.au/aviation/observat ... -diagrams/

Thanks for those 'updates 'didgman'. Exciting weather in the polar vortex region.
Up until now most of wave action has been quite vertical and confined to sub polar region.
Looking at ACC g jetstreams this morning there is some decent undulations developing in the sub tropical jet atm on the horizontal plane.
Sub polar jet is showing some minor strengthening atm
I will take a snap of the jetstream later and post.
http://www.bom.gov.au/australia/charts/ ... fresh+View
Top

Given that the heating anomaly at 50HPA is still stationary and is increasing in size, is that likely to lead to a series of sharp cold snaps with every LWT?? JS??
Wallan PWS: https://www.wunderground.com/personal-w ... N9#history

I have just been reading another reputable site that claims the opposite?
re..
Why is the jetstream so far south?
quote
From a climatological viewpoint, the position of the polar front forms a more-or-less even band around the globe at mid-latitudes in both hemispheres.
The average polar-front position slips north and south with the seasons in response to the annual hemispheric heating cycle.
Like my waistline's annual cycle, the polar frontal belt shrinks poleward in the summer months and then expands toward the subtropics during the winter.
This site here has one of the best explanations of jetstream behavior l have come across.
Endorsed on a pilots forum
http://www.atpforum.eu/showthread.php?p=34664

http://www.islandnet.com/~see/weather/e ... tream2.htm
....
Actually the above was my understanding of the seasonal shift in the polar jet stream . It migrates northward in the winter. Isn't that why we get our strong frontal systems down south?

It just hasn't been happening in at least June, early July this year anyway.
Top

crikey wrote: ↑
Sun Jul 21, 2019 1:13 pm
.
Actually the above was my understanding of the seasonal shift in the polar jet stream . It migrates northward in the winter. Isn't that why we get our strong frontal systems down south?

It just hasn't been happening in at least June, early July this year anyway.

Was my understanding too

The idea I was posing above was; is this about to change and change with a vengeance re "It just hasn't been happening in at least June, early July this year anyway."

Return to “The MET Centre”