Tuesday looks marginal for us. Hoping we get some substantial rain. Year to date so far Launceston 53 mm Hobart 43 mm.
Top

All this humidity has shorted my Davis thermometer. Need a dry spell to hopefully bring it back.

Be careful what you wish for

4 + 10mm for us, missed the deluges but passed 22mm for the week and 55mm mtd, so it's still ridiculously green and wet. Unfortunately I haven't kept tabs on the number of foggy mornings we've had - would have to be a Feb record. Pea soup with drizzle again this morning.
Top

Ended up with 14.2mm mostly thanks to the second band. It is amazing how often Mt Macedon/Central Highlands will split an event like yesterdays storm.
Not even Trentham did well out of it.
My week total now is 25mm. I dont think i've ever seen it so green here in summer (apart from the two drought breaking years) this time last year it looked like hell around this area, now it looks as green as can be.
Foggy drippy and chilly this morning.
Top

Few gauges showing falls in the 90s mm. Looks to have peaked just south of the Princess Highway.

Just checked my numbers and our peak rainfall rate was 250mm/hr so ever minute at the peak was dropping 4mm. Adds up quick when it is that heavy.

47mm here up to 9am and probably got a few more mm in the short sharp shower that moved through just now.

Had fog and drizzle pretty much all day here with 7.4mm in the gauge. It only reached 17c and that was early this morning. Most of the day was around 14-15c, and currently 13.9c. Felt more like late autumn than summer, but perfect weather for me

Thick drizzle and fog all day in the Dandenong. Clocked up another 10mm, so just shy of 60mm for the 24 and a bit hours

Drove down to Walkerville around noon and was thick fog the whole way except for about 15km either side of Pakenham. Driving through Kilcunda to Tarwin was thick fog sat down to sea level. Never seen anything like it in mid arvo in winter, never mind mid summer. Seriously wierd. Then spent the arvo surfing in fog at Waratah Bay

The Synoptics are fascinating with the trough and cool change stalling just east of Melbourne. It meant humidity and winds were coming from the Tasman through Bass Strait the wrapping cyclonically into central Vic. The trough was moving west so took the form of a summer warm front.

Bit of instability tomorrow so the odd shower around. Monday looks a bit better. Front waving into a decent low for Wednesday. The exact placement of the low will determine how much we all get, but currently tending to favour east central and Gippsland.
Top

Photo at Tarwin at about 20m elevation showing the fog. Viz was 50-100m. The Bald Hill wind farm is hiding in the fog 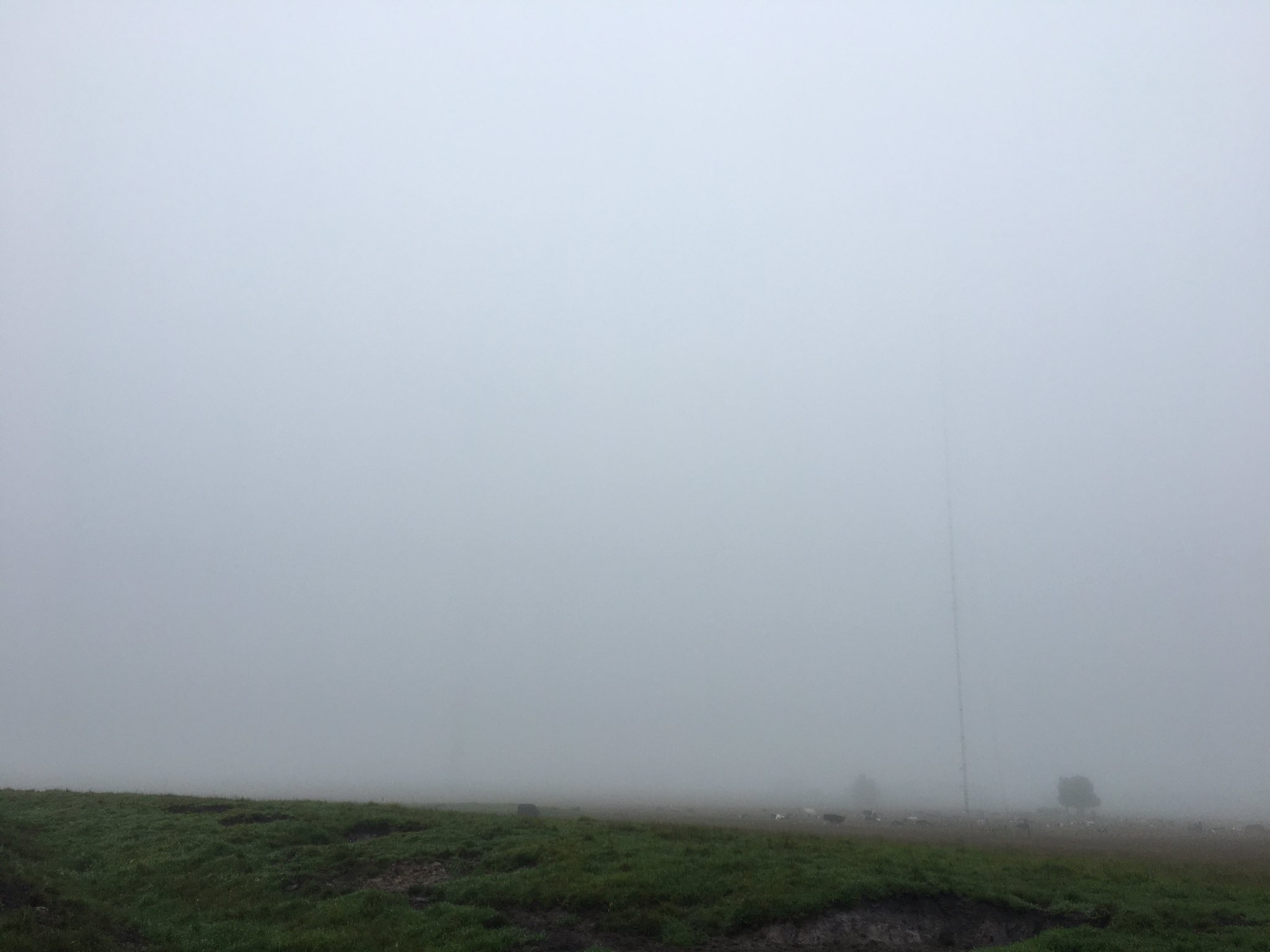 We have mushrooms popping up and some really amazing vomit like slime on Mulch.
what month is it ?
http://australis.redbubble.com/
Top

Few spots last night but not enough to tip the bucket in the gauge. Warm humid day to come. Maybe the odd shower, but hit and miss away from the Otways and Gippsland. Similar for Monday.

My type of summer weather though some remarkable rainfall contrast as most of the rain the past six weeks has been slow moving bands of showers and storms. Locally in the Nongs this weekend southern areas have seen around 60mm, northern parts around 25mm while eastern parts have seen locally as little as 10mm. Around the burbs northeast suburbs have seen as little as 5mm

Still drizzling here this morning. Had a further further 3mm overnight. MTD is 55.4mm, which is now above average, and YTD is on 201mm. Wish every year could be a wet summer!
Top

Wow, just went out to Malmsbury to the farmers market, left home in ground level fog/mist and 14C. The fog disappeared at the summit of MM which is less than 1km from home.
A boomingly bright sun and 24C at Malmsbury had me running from shade tree to shade tree at the market shedding layers of clothes like a stripper.
Safely back home in the mist zone now and still 14C.
Top

A long way out but ACCESS G suggesting a burst of heat in 8 days time.
Top

Thanks for the tip. Started in the house and worked back to the weather station. In the end found the outdoor transmitter had water in it. Dried it out and all good again. It’s pretty well sealed but the rain as insane - peak rate of 248mm/hr so guess it just forced its was in

Progs showing a nice upgrade for Tuesday (well apart from GFS). Punchy little low that bombs to near 990hPa on the Gippsland Coast. Will take a closer look in the morning. Just added the total and up to 96mm for the month. Garden looks a treat, though lawn mower, geese, ducks and chickens are struggling to keep up with the grass growth

13mm here by the looks from friday and saturday was in Qld for a few days so wet up there too.

Tuesday will be wet and stromy heavy rain for sure bit of flooding about too likely 50 to 80mm falls about odd 100mm possible.
Sadly nothing/little north of ranges again its like it will never rain up there
Wednesday cold and windy drizzle cloudly
Thursday slow easing cold

Big day Tuesday, winter after that, Hopefully some heat next week though wont last long
Bring on the heat and stroms
Top
Post Reply
337 posts